GET YOUR FREAK ON 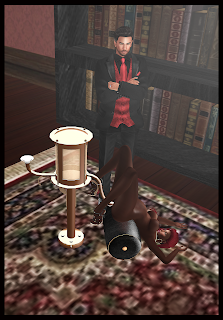 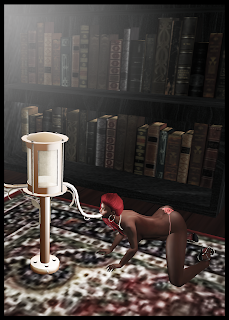 The poses are broken into two categories.   Consumer, well you can just use your imagination on what that means.  And Provider, which is just what I liked doing.  The animations are top notch and are bound to get even the freakiest of us hot and bothered.  Being a Dom, I truly appreciated the way I could watch the action from multiple angles independent from the consumer’s animations.  It was surprisingly appealing to have my own set of poses separate from hers. 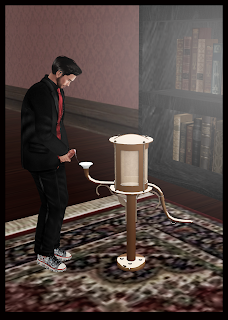 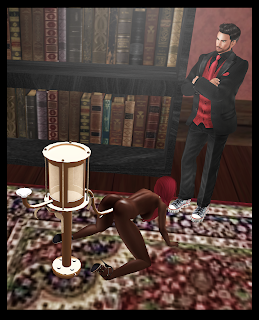 Until next time.  Keep your freak flag raised.

Dustin crossed the threshold and stopped, holding his breath and listening for the faint sounds of her.  Satisfied by the silence, he turned and dropped his briefcase on the floor. The clack of the feet on the tile enough to alert her he was home.  The corners of his mouth twisting up into a smile at the clinking of the chains.
It had been a long day, and he knew she was waiting for him just as he instructed.  His shoes clicked on each step as he ascended slowly, giving his girl time to anticipate her Master's arrival.  He paused again as she came into view.  A vision of red, from her hair to his favorite pair of lingerie. 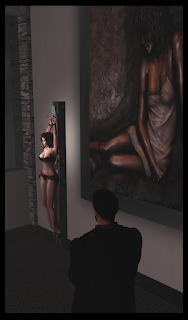 "Girl, did you miss me today?"  His voice was firm but soft.
She looked at him, eyes dark and tempting.  "Yes Sir."
Her voice is weak, exhausted from the post's unforgiving reach.  His hands caress her stomach, making her jump and the chains rattle.  Her eyes pleading for release, but the words never escaping her lips.  And they wouldn't.  She knew she would rest when he was sated.
"Come."  Dustin moves to release the chain from it's hook, catching her as she stumbles into his arms. He holds her, feeling the tremble in her body as she leans on him for support.
"You did well, Girl."  His hand strokes her back tenderly as she smiles up into his eyes.
"Thank you Sir."  she closes her eyes and he kisses her, a reward for the first of her completed tasks. 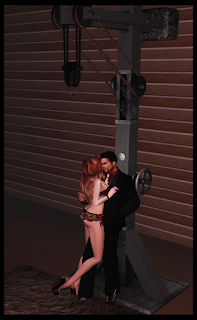 "Do you need to rest?" His question is sincere, but moot.
With a deep breath she straightens her back and looks him in the eye with conviction that speaks of love. "Not until Master is done with me."
His smile makes her flush.  Taking her by the hand he leads her to the crane, pulling down the chains with a loud screech.  He turns to reach for her, but her arms are already outstretched.  Her eyes on him, watching for each of his physical cues.  The clasps fit with a clink and he tugs them to check they are secure.  With a slow turn of the handle the chains begin to draw her arms up, over her head again.  His aching need swelling a bit as he hears her whimpers escape those perfect lips.
"You are a vision, Girl."  With a final turn her feet leave the ground and the weight of her shifts and swings before him. 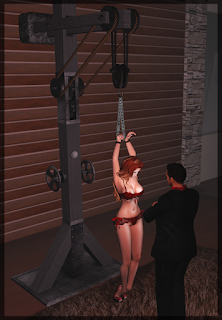 He moves to watch her, the rise and fall of her chest, the flush of her cheeks, the line of sweat between her breasts.  Nothing escaping his notice.  He moves to caress her arms with the backs of his fingers, being rewarded with the soft moan from her lips.  He presses his body to hers, kissing her neck as his hunger takes control.  She is his.  Here and now. 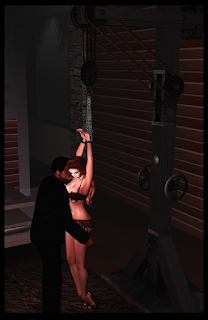 William moved through the house with a light step that defied the importance of his endeavors.  He glided from one room to the next, parting the curtains and opening up the windows to let air into the muggy rooms.  A thick layer of dust covered everything in sight.  Covers had smartly been placed on the furniture before they left the estate.  No one had known how long they would be gone, so they had left the place with care.
Pulling the sheet off the Lady’s chair with a quick jerk sent particles in the air.  William had no time to watch them dance in the light as he moved to the cupboard.  Taking the pillow out and setting it just to the side of the foot of the chair for the Lady’s girl.  How often had he envied her?  Sitting at Lady Pearl’s feet, her prized one above all others.  He ran his fingers over the soft fabric and then turned back to his chores.  He was far too old to be getting up and down from a pillow.  He still served the Lady in his own way, and he knew his value.
Taking the remaining sheets and pushing them into the laundry, William moved to the next task at hand.  Pulling out his keys, the large ring would confuse most but he knew them all by heart, he slid the notched key into the study door and unlocked it with a soft click.  Looking about for prying eyes and finding none, he pushed the door open just enough to enter and closed it soundly with another turn of the lock.  The Lady’s private study was a well-guarded secret.  The lighting was dim, so William took a moment to let his eyes adjust as he glanced around at the bench and cross.  Both would need his attention before the Lady could use them.
Opening the cabinet, William pulled the small can of oil and the cleaning cloth out and set to work.  Each had to be polished and prepared.  The Lady took pride in her things, both in possessions and people.  He shuddered this time, picturing the girl on the cross as he applied the oil to the leather.  What pleasures would she endure at the Lady’s touch?  Even he did not know what happened in the room.  Only those who serviced the Lady’s particular desires were ever allowed in the study with her.  He leaned against the cross and took in the scent of the wood and closed his eyes.  His cheeks flushing at the thought of the Lady’s fingers on the girl, then on him.  Snapping his eyes open and standing, shaking the image from his head.  That wasn’t his place.  He adjusted his erection and finished his work on the apparatus in the room. 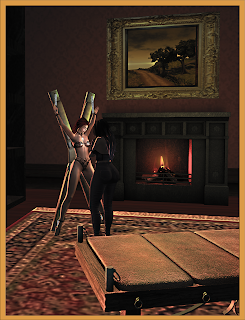 Moving out of the study again, checking that no one was watching as he closed the door and took several breaths to ease the aching in his pants.  The relief was short lived as he turned to walk out the French doors onto the large stone path that lead to the pool.  Lady Pearl sat at the edge of the pool, hand in her girl’s hair as she pushed the girl’s face between her legs.  Her back arched, mouth open.  If William had been closer he was sure he would hear those lips moaning in ways he had always longed to be responsible for.  His cock swelled again as he froze in place and watched the scene play out before him.  His Lady’s back arched, hips rocking, hand gripping the hair of her girl as her legs start to tremble.  The scream of her girl’s name filled his ears as his own cock twitched and leaked a spot on his pressed pants.  The Lady’s body relaxing and falling back on the white marble poolside.  William’s gaze turned to Her girl climbing out of the pool, the water dripping off her naked body as she lays down next to her love.  Holding each other as the Lady’s breathing returned to normal.  William couldn’t take his eyes off the gentle up and down of her perfect breasts in the sun. 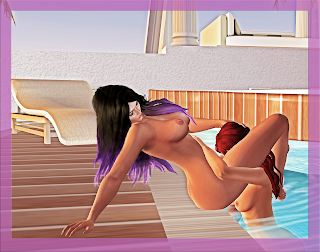 William turned to leave, stopping when he heard his name. “William, a moment.”
She was up now, moving the distance between them in her cat like grace.  He diverted his eyes from her naked body, trying his best to breath as she neared him.  Her girl close behind, equally nude making his efforts nearly impossible.  If they noticed his swollen bulge they didn’t acknowledge it.  He was thankful for that.
She stopped before him, reaching out and tipping his chin up to look her in the eyes.  Those eyes, the deepest pools of lavender he had ever seen.  His voice almost broke as he spoke, “How may I serve you my Lady?”


“Send out invitations to everyone. It’s time they know we are back.”