Her eyes roamed his body, taking in each line of his muscled torso as he rested on the pillow at her feet.  Her pillow.  Her boy.  She smiled to herself but never let it show.  Her face stayed placid, almost bored as he waited patiently for her command.  Kersti enjoyed the time with her boy.  Each hour at work passed so slowly when she knew he would be there waiting on his pillow for her arrival.  Today, she felt those hours and, so he would too. 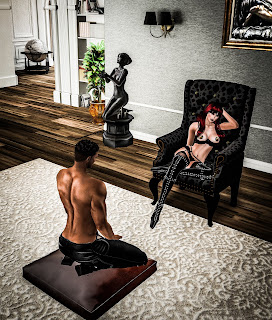 Kersti shifted in her chair, hardly looking in the boy’s direction now.  She inspected her nails, toyed with the leather of the chair, and occasionally slide her fingers along the exposed curve of her breast just to hear the catch in her boy’s breath.  Again, she fought back a smile.  She would keep this up until he was begging for her attention.

“Dance for me.  I am bored.”  She looked to him, eyes shining with anticipation.

“Yes Miss.”  The boy moved his body slowly.  She could see the nervousness in his eyes.  His body moved with little rhythm.  His embarrassment only served to make her yearn for him more.  He danced his awkward dance for her pleasure and she watched the blush in his cheeks and the roll of his hips. 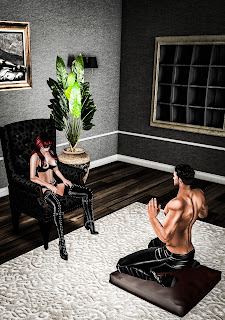 Standing she moved around him as he danced.  Her fingers reaching out to lightly drag along his arm, then his shoulder.  She raked her nails across his back sending shivers down his spine, but he never stopped moving.  Such a good boy.
Kersti stopped in front of the boy, kneeling on the floor and dragging her fingers along his chest.  Looking him in the eye as she swirled a light fingertip around his nipple.  His back arched and his breath caught but he never wavered.  She was impressed with his devotion.  It would earn him a bit of fun.
“Stop, don’t move.”  The order was quick but firm.  He froze in place, arms up, chest out, and body open for her pleasure.  She moved to the floor, arching her back before him and spreading her legs.  Letting his eyes roam her body as she felt the moisture soaking her thin silk panties.  She smiled at last as his eyes found that soft mound.  Seeing the bulge in his pants flex and throb made it all the more fun as she laid back and ran her hands along her thighs and stomach.
“You have been very patient.”  She cupped her breasts in her hands, rolling her fingers over the nipple covers that barely hid her hardening tips.  Her own back arched, pushing her breasts up as a faint moan escaped her lips.  Lust filled her eyes as she looked up at him and wished for his hands to roam across her curves.  Soon, but not quite yet. 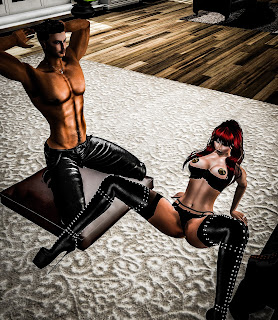 “Perhaps you would enjoy a little bit of a reward.”  She looked again at his swollen bulge moved to stand.  “Undress and let me see just how much you need it.”
He did not hesitate.  Lowering his arms to undo the button of his pants, he pushed them down to his knees.  The boy was smart, never taking his eyes from hers and never standing.  She commanded his attention, but also kept him in his place.  Her own eyes dipped down, darkening with desire as his freed cock came into view.  She moved her leg forward to drag the leather of her boots against the thick shaft and the boy shuddered.  His eyes closing for a moment as the pleasure of it filled his senses.
She moved a step away, allowing him to finish pulling his pants off his bent legs before kneeling quietly before her again.
“Lay down and stroke yourself slowly for me.” 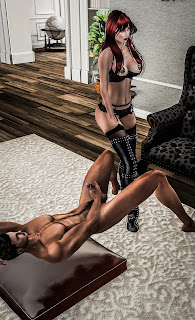 He laid back on the cushion, shifting to plant his feet on the floor on either side of her.  She turned a bit, not standing directly towards him.  Her face placid again as his hand gripped his cock and began its task.  She glanced at him occasionally, as if bored again.  The only betrayal of that truth being the damp patch formed on her panties.  She waited so long for him today.  He wouldn’t have to wait for her much longer.

Hey gang.  Today I am making a review post, but not on products.  ::WS:: opened up a new store and so I thought I would take a look around and give you my opinion on the changes. 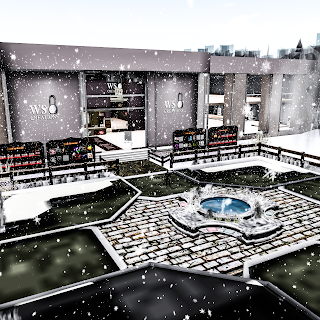 At first glance the new SIM is lovely.  You can see here it's all decorated for winter with snow everywhere.  The affect of it falling from the sky is breath taking.  The landscaping is so well done that I forgot to check out the store for the first 10 minutes I arrived.  So well done WS team.  One of my favorite little spots is the gazebo outside the store. 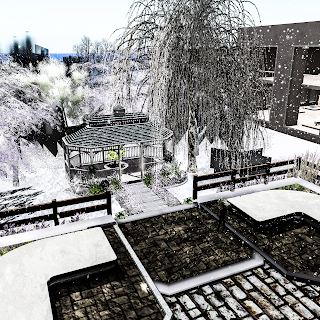 There are other stores on the SIM as well.  Partner businesses like a photography studio and texture store.  So when you come to check out WS, look around and support the other businesses as well.  Dani is an amazing photographer and Kushi is one of the top texture makes in SL.  Well worth the venture, you wont be disappointed. 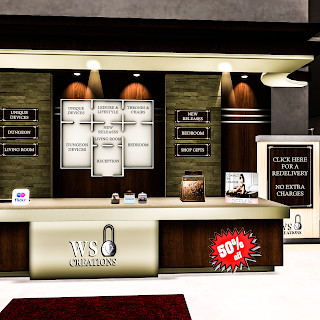 Let me stop right here for a moment.  Notice that flash of red?  That's right.. 50% off.. so you better hurry your ass down there if you haven't already.

The store is well laid out, areas are well defined and easy to find.  The map is there as soon as you walk in so you know exactly where to go for what you are looking for.  And did I mention it may be 50% off? 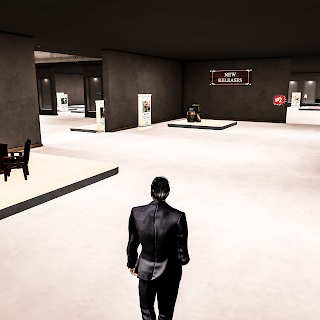 There is lots of room here.  There will be plenty of space for expansion and growing and adding all those new items we are chomping at the bits to get our hands on.  The store is light and clean.  And honestly it doesn't have all those annoying little additions here and there of gimics that add lag or distract us from what we want.  The awesome WS products. 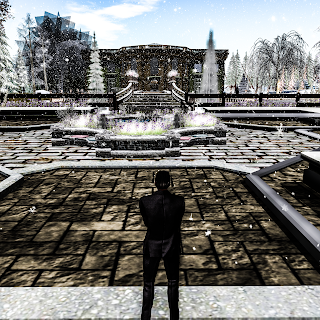 After poking around the store and realizing just how much more money I need to make in SL to get everything I want, I ducked back out to view the SIM again.  From the looks of it the SIM will adjust with the seasons, so I will enjoy the snow while I can, and look forward to the spring thaw and the flowers it brings.  I am sure I will be seeing you all there as well.


She watched her from the shadows.  The soft clinking of the chains as the girl moved filled the stillness of the room.   Her steps were light and slow as she moved around the girl.  She wasn’t hiding, the girl knew she was there.  She was always there.  Anticipation grew with each step and each breath until it was thick between them.  Every click of her heal made the girl twist and move on the bench.  She liked how the girl’s breath caught in her chest for a moment when she heard that tiny tap on the floor. 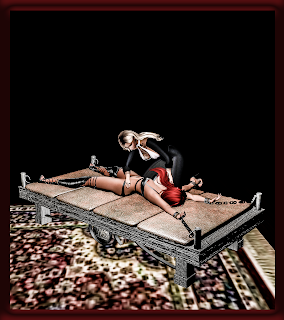 She moved to her now, the light illuminating her at last as she leaned down and caressed her fingertips over the girl’s smooth flesh.  Goosebumps appeared on the girl’s skin as she raked her nails softly along.  Those breaths more catching again, then speeding up a bit as her fingers teased along her inner thighs.  A small smile spread across her lips as she moved lower, blowing out across her skin as she brushed those silk panties gently.  The moan was low but audible as the girl bit her lip and arched her back.
“My girl has been patient today.”  She teased her tongue out, tracing it around the girl’s belly button.  The trembles that rolled rippled across her body made the girl push up against that playful invader.  Her teeth nipped the girl’s flesh getting a sudden yip followed by a deep groan.
Her lips traced the prone body.  Butterfly light as she travelled in slow exploration of her girl.  She knew this body well, but she never tired of it.  Her fingers moved up those curves, stopping to cup the girl’s breath through her thin top.  Those nipples already hard as she rolled them through the fabric with her thumb.  Her mouth found the other, teeth biting down on it and tugging just a bit until the girl’s moan mixed with a soft whimper. 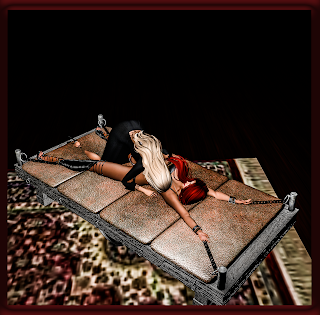 She climbed onto the table now, her body pressing against the girl.  Lips brushing and sucking at pleasure points all along her skin.   Grinding down as the girl pushed up into her, their bodies in a dance of pleasure.  The chains clinked hard as the girl struggled.  She knew nothing would please the girl more than to have her hands free to explore as well.  There would be time for that when she was ready.
Pushing herself up, she stood over her girl.  Her eyes finding their way up until their gaze met.  Her girl’s eyes were lost in lust and need.  She had been patient, but was nearing that point where resolve breaks and begging begins.
“Please Miss..”  Those luscious lips trembled as the girl spoke.  She smiled down at the girl, watching the girl’s body writhe and strain against the restrains.
She stood still, not responding as she towered over the girl.  Her eyes never leaving their gaze as the girl struggled to move her body to reach her Miss.  After considerable effort, the girl’s panties brushed across her Miss and the girl shuddered and groaned.
“Tsk tsk.  Now that wasn’t being a good girl at all.”  Her foot raised, toe pressing down against the girl’s soft, covered mound.  The girl’s breath caught quickly and her legs tried to close around the weight of the foot, but she just kept pressing down against that swollen clit.  “What does the girl have to say?”
“I’m sorry Miss.”  The flush in her cheeks told a different story. 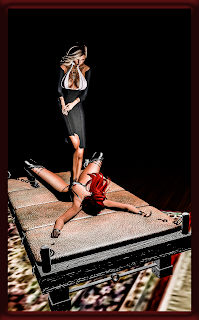 “I don’t believe you girl.”  She pressed more, letting that sole of her shoe rub against the girl’s silk covered button.  Her smile now devilish as the girl’s moans became loud enough to fill the room.
“Oh God!”  The girl pushed against her foot, wanting more of it as the words poured from her lips.  “Please Miss.  I’m sorry.  Let me make it up to you!”
Satisfied she moved to the floor again.  Taking her time to drag her nails along the girls flesh as she released her legs first, then her arms.  The girl did not stand or try take hold of her.  She knew better.  Taking the girl’s legs, she spun her sideways into a sitting position on the side of the bench.  Walking into the shadows slowly so the girl could see, she sought out the soft leather whip that she kept for the needed punishments. 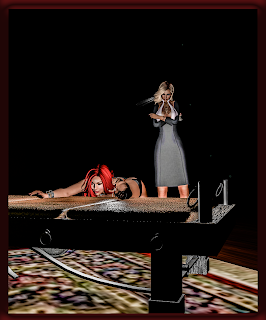 Turning and slipping the leather through her fingers as she looked to the girl.  “You know what to do.”  There was no hesitation as the girl turned and leaned over the bench.  Those ripe cheeks on display as she stood there and watched.  Who knows how long it would be until the first strike of the whip struck those round cheeks.  But when they do, it will be worth the wait.