He took in her scent as she rested against him; lavender and something he couldn’t quite identify.  His fingers traced along her skin and he smiled to himself as she tensed and relaxed in response to his touch.  Her warmth melded to his body and he sighed.

She had been his now for only a few weeks, but she had learned the subtle cues he gave.  Her hand moved to the back of his neck as he kissed gently at her pulse.  His own hand gripped her arm, firm enough to give no doubt of his strength and control. 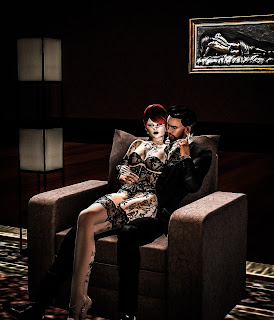 He pulled her, dragging her around to face him go give greater access to her neck.  She turned her head, offering him greater access.  The pulse in her neck quickened as he rapped his lips around her flesh and sucked hard, pulling the blood to the surface.  It didn't take long for the weight of her body against him to inspire a firm bulge in his slacks. 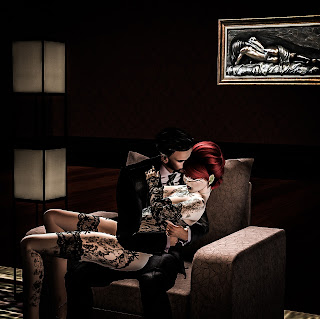 His hands roamed her body, cupping and teasing her breast through her bra as he whispered his every desire in her ear.  The way he would tease her for hours, or how he would make her beg for release upon his cock.  Without warning, those same fingers slid down to trace the soft lips of her sex through her wet panties. 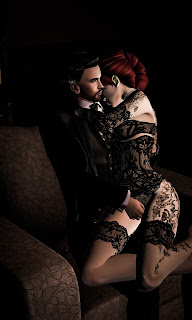 Her gasp filled his ear as she nuzzled into his neck and spread her legs for him.  The lace of her panties was all that separated his fingers from her sex.  Her breath returned to her in slow moan as he caressed her mound.  Tracing those soft lips with his fingers through the thin fabric.  Her cheeks moved against his aching bulge, sending jolts of pleasure through his spine.  She tighten her grip on his jacket, the tremble of her body and the shortening of her breaths told how close she was to her own orgasm. 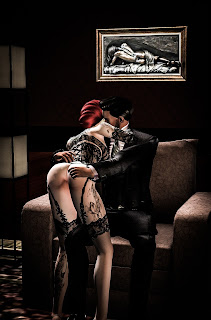 He stood her, hearing the whimper in her voice as he did, "Sir, please don't stop, I was so close."  His teeth nipped at her neck, giving her the only warning she would get to do as she was directed.  Her whimpering stopped and she took a deep breath to calm her heart.  His hands caressed along her legs, gently roaming the curve of her hips before moving to cup her ass.  Fingers kneading those soft orbs as he returned to sucking at the bend of her neck.  Her moans were soft as he teased her, urging her down onto his knee. 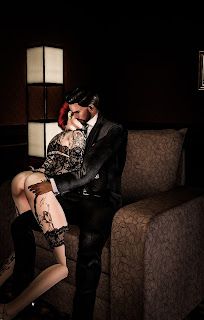 She pressed herself down on his leg, knee firmly pressed against her mound as she began to rock her hips.  The wet mound of her panties pushed against his slack covered leg, dragging back and forth as he kissed her.  Teasing her fleshy cheeks, kneading them, pulling her to speed up the grinds against his thigh.

"That's it girl, work yourself on my thigh." he said quietly but firmly.  She moaned again, holding onto his coat as she steadied herself.  Her eyes locked in his, as she pleaded silently for her release.

He leaned back, watching her work herself against his leg as her hands dropped to his bulge.  Tracing it's length with her fingers, then back up to his belt.  Trembling as she pulled at the leather in hopes he would not stop her.  She watched his eyes, ready to pull back but she didn't have to.  The belt pulled free and she deftly popped his button and pulled down his zipper.  She smiled to herself triumphantly as her fingers snaked into the waist of his boxers and pulled out his throbbing member. 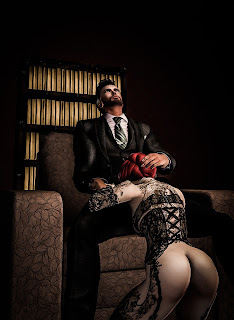 His back arched as she dropped to the floor.  All focus on her own needs forgotten as she moved to swirl her tongue across the tip of his cock.  He knew then that he had her, and hoped she didn't realize just how much she had him in return. 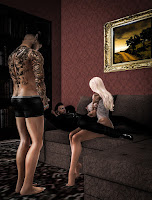 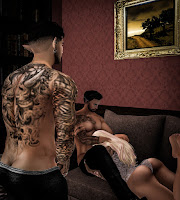 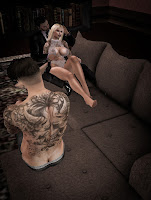 The texture huds allow you to change the look of the furniture, changing the cushions, frame, seat, and legs of the chair sofa, and the lamp and coffee table can be altered as well, to fit any room.  The textures are very well done and the HUD is direct and simple to use.  There was some difficulty on the suade choices in the HUD, but otherwise everything worked beautifully. 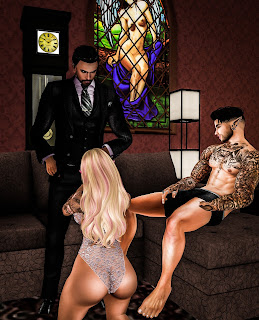 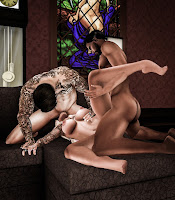 And some of these animations are the hottest I've seen around.

Had a lot of fun trying out the poses on this set.  I am sure you will too.  This has got to be the best WS Creations furniture piece I have tried out so far.  Other than the problem with the HUD, everything else was truly spectacular. 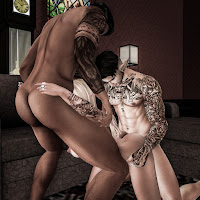 Thanks again everyone,  See you next time.

He clicked off the T.V. as the ball ended its descent marking the beginning of 2018.  The year was young, and so was his night.  Taking a drink of his champagne and crossing to the woman tied to the post, he let his eyes roam her curves in anticipation.  Tilting her head up for a kiss, enjoying her soft moan as his lips meet hers and he shares the taste of the beverage from his tongue. 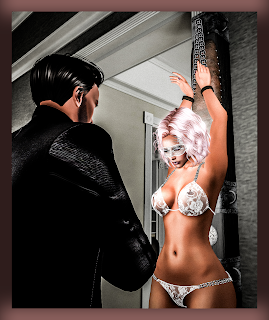 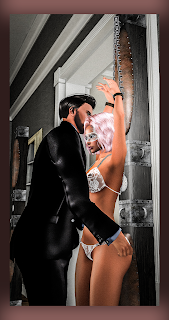 Her eyes sparkle as the kiss breaks, and he caresses her neck to feel her pulse racing.  Staying close enough to take in her scent as his finger tease along her body.  His lips move to her ear, sucking gently at her lobe making her back arch against the wooden post.  Each movement of her body only spurred him on as his teeth nipped at that soft flesh and his fingers cupped her breast.  His fingers teasing across the nipple through her thin top, enjoying how they hardened at his touch.

“The night is young.  I think I am going to practice patience in this new year.”  His words are whispers in her ear.  Breath warm as it touches her skin.  The whimper she breathes in return makes him pull back and kiss her lips again.  With a slow grind he proved to her his excitement as his bulge pressed against her soft covered mound.

Her body responded, shifting against the post making the chains rattle and her thighs press around his leg trying to pull him closer.  Pressing his weight against her as his hands moved up to undo the chains, he released her arms and caught her as she relaxed.  Stepping back and taking her hand as he moved to sit in the chair by the window. 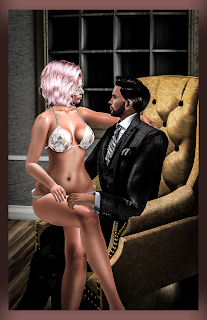 She looked like an angel in the light pouring in, but he wanted anything but a angel tonight.  He pulled her onto his lap and caressed the curves of her body as she began to kiss his neck.  Turning his neck to give her more space, he allowed her to tease his pulse with soft kisses and darting licks with her tongue.  The growing bulge was beginning to ache beneath her weight as he grasped the end of the champagne bottle close by and pushed her back.

“We need to celebrate the new year.”  She responded to his words knowingly.  Arching her back and pushing out her breasts as he poured the bubbly liquid onto her flesh.  It ran down across the tops of her breasts and into her cleavage as she giggled and bit her lip in anticipation. 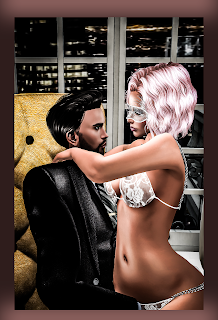 Her moan was audible as his tongue traced the path of that liquid.  Tasting it mixed with the salty sweat of her flesh making his cock ache under the weight of her body.  His hands on her back, holding her close as she arched further and pushed her breasts against his face.   Those thin fingers in his hair, urging him to take more of her as he pleased.  Sucking at the flesh of her breasts, cleaning the liquid with his tongue as it dried into a sticky sweet film for his pleasure.  Finding her nipple through her top and tugging it with his lips as she writhed and groaned on top of him.

“Please Sir,” her words came out half moan and half plea, “you promised me I could be your pleasure after the ball dropped.”  Her hands moved to his bulge, caressing it through his slacks.  He pulled away from her breast, leaving the fabric wet and her nipple hard and clearly visible. 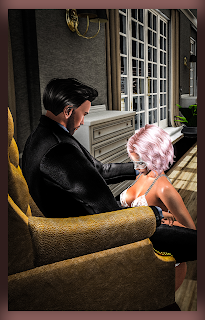 She slid off his lap with a smile.  Her fingers worked nimbly at his belt and buttons as she kept her eyes on his.  He had made several promises for the new year, but this is the one he was going to enjoy the most.