Vyolet stretched her aching body out on the lounger, the breeze tickling across her flesh to cool it from the heat of the day.  The sun was hot, feeling as if it had moved closer to the beach than the rest of the world.  Vyolet grinned at the idea.  What if climate change was simply the product of a moody star.  Her eyes closed, taking in the sounds of the ocean and pondered if the water would cool her flesh or simply boil her alive due to the mischievous heavenly body. 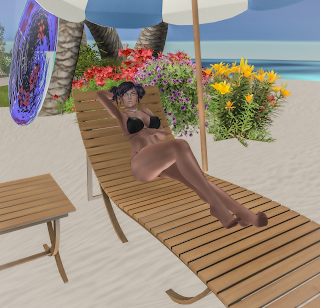 Speaking of heavenly bodies.  Vyolet opened her eyes slowly, letting them adjust again to the bright light of the wicked sun.  The blur faded away, the hazy water being replaced by the figure of a lovely woman moving gracefully towards her lounger.  Vyolet smiled, she had seen this same woman several times since her arrival.  Most recently, at the resort bar last night.  Always alone.

"Hi."  The girl moved her fingers along one arm, almost in a submissive posture, but her movements along the beach showed a deeper confidence.

"Again?"  The girl feigned ignorance which made Vyolet chuckle.

"You don't really blend in, and I've seen you here and there around the beach."  Vyolet shifted up onto her elbows made no attempts to hide her roaming eyes.

"Yeah.  You stand out too."  The girl smiled back, knowing she had been caught. 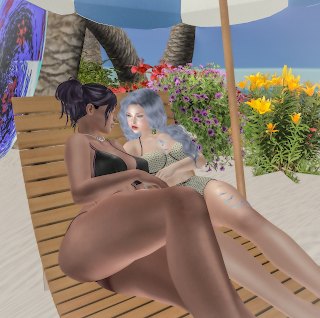 "Well come sit.  It would be impolite not to invite my own stalker not to sit with me."  Vyolet shimmied a bit over, but not enough to give ample space.

"Stalker?"  The girl grinned but didn't refuse the seat.  Their bodies brushed each other a little at first, but then the girl realized Vyolet was not giving up any more room and she settled to laying more against the buxom beauty.  Vyolet felt the smooth skin against her own and trembled just a bit.  The scent of her hair filled her senses just as her mind began to work the girl's appearance. 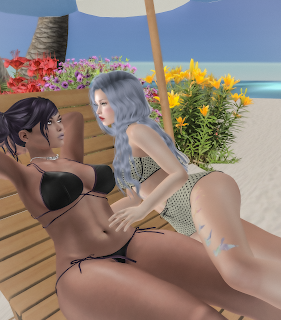 Her nails, short like Vyolet's, her bikini, fashionable, comfortable, versitile.  A few well concealed scars that peek from the material or barely visible under the disguise of make up.  Her hair, cared for, but not too much, a woman on the go... perhaps travelling a lot.

Vyolet looked the girl in the eyes and saw the same scan going over her body.  The girl's fingertips lightly tracing across a small line from a puncture wound in her belly.  Was that coincidence, or had she noticed the way Vyolet had tried to conceal it.  Vyolet wasn't sure, but she fought the way her muscles wanted to tense. 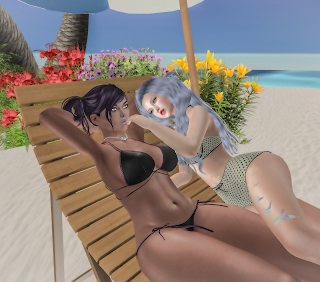 "Shhhhhh... M will do."  Vyolet pushed her fingers against the woman's lips to silence her.  She didn't want to have any information from her other than what she could learn on her own.  There was a growing feeling in the pit of her stomach, and she tended to listen to it before all else.  "You can call me Vy."

M's fingers brush along Vyolet's stomach, then up, between her breasts to her neck.  Vyolet felt her body wanting to tense, but instead she relaxed her muscles and let the woman explore.  She traced Vyolet's lips with a light fingertip then moved along the line of her jaw.

"So what do you do for a living?"  M's eyes followed her fingers lazily.

"I work freelance.  Where and when I want."  Vyolet smiled and turned a bit towards M.  "That way, I stay in control of my life."

"Oh.. so you are a lady of control?"  M grinned and gripped the back of Vyolet's neck, pulling her into a deep, sudden kiss. Their lips met, and Vyolet moved to grip M's hip.  Her mind raced in thought, kissing M back if only to give her time to think. 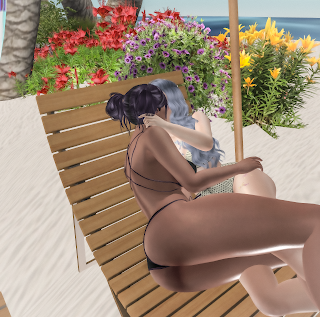 Vyolet had come to this spot in the resort because it was secluded and private.  She had been there hours without seeing another person before M showed up.  Last night at the bar, the night before at the restaurant.  Was she being followed?  Was this really a stalker or was it something more?  Vyolet took a breath and let her fingertips learn more.  She closed her eyes to the sites and her ears to the soft moaning of the woman as her fingers moved across her skin.

That is all it took.  That soft exploration of M's body.  Two more scars along her back, one circular and one clearly a puncture.  Vyolet slowly softened the kiss until the two parted their lips.

"Wheew.. where did that come from?"  Vyolet rested back and fanned herself playfully.

"Oh.. something I wanted since the moment I saw you."  M grinned and reached over, picking up a small bottle of sun screen.  "Want me to help you out?" 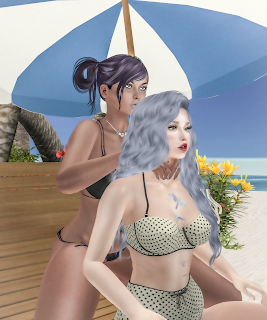 "You first."  Grabbing the bottle from the beauty, Vyolet moved to the back of the lounger, giving her room to settle in front of her.  The lotion was cool in her hands as she warmed it, her eyes roaming the woman's curves.  Such a pity.

Vyolet's hands moved along the soft, pale skin.  Feeling her muscles tensing under her touch.  That was the last bit of proof Vyolet needed of her decision as she moved up and around the woman's neck.  He fingers wrapped around M's neck, squeezing tight.  M's hands moved to grip Vyolet's wrists, struggling to break free.  With trained skill, Vyolet's legs come up and wrapped around the woman's body before she could stand, trapping her there.  M clawed at her flesh, tried to gouge at Vyolet's eyes, the fight to live, intense as with all living creatures.

Vyolet held tight until the struggle began to slow.  The life of the beautiful woman fading even as the sun first touched the waves of the water.  Both tragedy and beauty.

Hey gang.  It's review time and I thought I'd take a look at the ::WS:: Beach Towel, since it's definitely HOT outside.  Time for catching some rays.. and some sexy ladies. 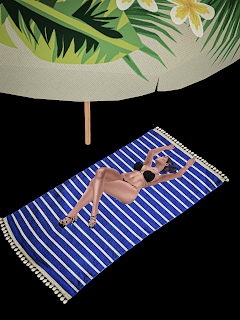 I doubt that this needs to be mentioned, but I believe in the RP aspect of every piece of "furniture" in SL.  I try to mention it in my reviews each time.  So.. what is a lovely beach without the beach towel?  Do you go to the beach without one?  If you do.. what planet are you from?  We all need a beach towel.  Just saying. 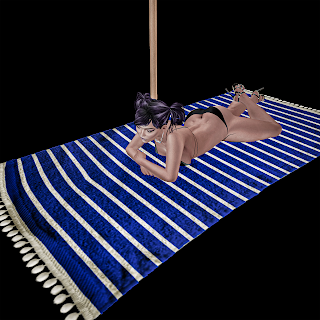 The textures are lovely, which is a staple of ::WS::.  The towel comes with a HUD for easy texture change and tinting.  So it is easy to lay out towels in a colorful spread at your beach and make each one unique. 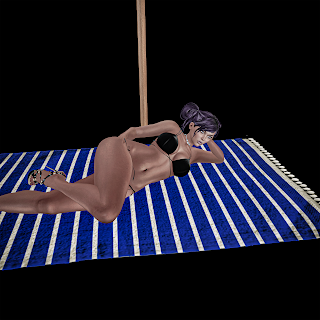 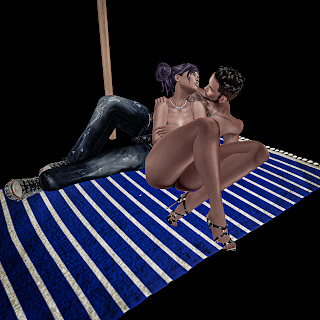 The towel is Aeros, Vajayjay, and It's Not Mine compatible as well, for all those wonderfully naughty folks out there. 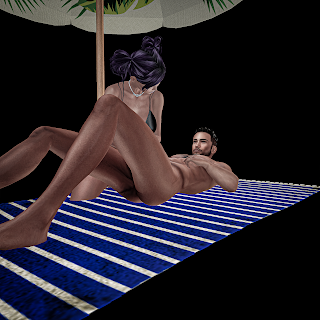 I really liked the ::WS:: Beach Towel, and honestly more than i thought I would.  So I am happily giving it a 4 cocks up.  Have fun with it, and if you disagree with my review please give me a shout. Until then, Let those freak flags fly. 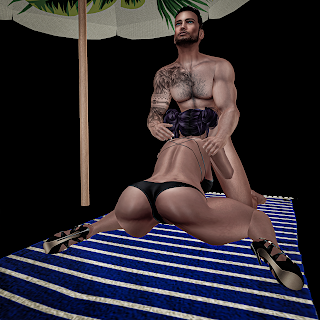 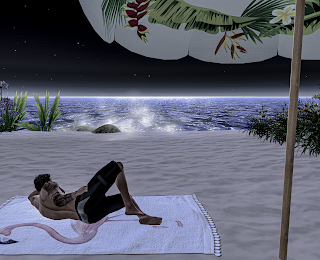 The water crashed against the rocks in the moonlight.  Sparkles of light burst into the air but he didn't notice any of it.  Constant sounds of waves filled the air but all he could hear was the beating of his heart in his chest.  It's pace picked up as he thought of her and the night they would have when she arrived.  He waited her, not for the view or the peace and quiet, but to be alone with her at last.

He spotted her at the far end of the beach, moving along the sand and waves in a carefree stroll.  In his head he pictured one of those cheesy Hollywood moments where they ran at each other in slow motion, arms out, crashing together in a kiss that made the heavens envious.  But he knew better than to do that.  There on the towel he waited and watched. 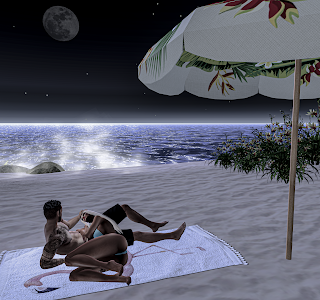 When she was near enough he could finally see the moonlight in her hair he smiled and she smiled in return.  She didn't say a word, she didn't need to.  She laid next to him, resting her head on his chest, looking into his blue eyes as he stroked her silky hair.  It was a perfect moment.

"Did your Daddy see you leave?"  he finally broke the silence.

"No.  He was too busy watching the game and texting whatever girl he wanted next."  She frowned a bit and snuggled closer to his chest.

"He is an idiot then."  he pulled her up, kissing her lips softly and wrapping her in his strong arms.

He could feel her tremble and her breath catch.  Their kiss deepened and her fingertips trailed his arm to his shoulder and down his side.  The kiss swelled with hunger, tongues sliding against each other, hands exploring exposed flesh, they showed each other how much they needed this moment in every breath they took. 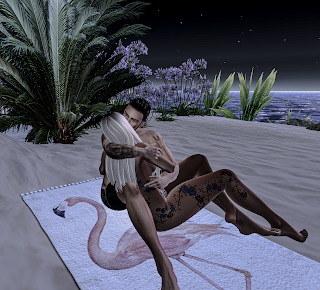 His hand trailed up her stomach, fingertips light along her smooth skin making a trail of goosebumps as it went.  Reaching her breast at last, cupping the soft flesh through her top.  Her pulse quickened as his lips sucked at her neck.  The tip of her nipple hardening as his thumb brushed over it in slow circles.  She gasped in his ear and her nails dug into his back.  This is what he had craved.

Kissing back across her jaw to her lips again.  This time the kiss was pure passion and lust.  They battled with their tongues and lips.  His hand gripping her breast tightly, pinching the nipple between his fingers as she reached down and traced the length of his bulge with her palm.  His back arched and a groan escaped his lips, but he wasn't ready for that.

Pushing her on her back and pinning her arms above her head, he leaned down and began kissing his way along her chest.  His teeth raked the flesh of her breast, biting it softly, not able to leave the mark he wanted.  His tongue traced the edge of her top playfully before he sucked her nipple through the thin bikini top. 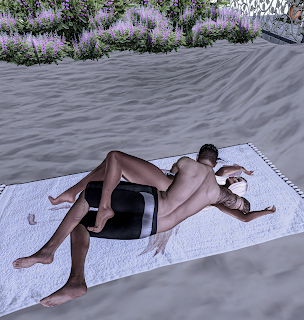 Her back arched in response, her soft whimpers turned into loud groans that competed with the crashing waves.  He sucked harder, pulling at the covered nipple, enjoying the tease of it all.  He knew he would have her naked before they were done, but he wasn't going to rush.

He moved to the other side, repeating the teasing to her previously neglected nipple.  She gripped his hair, pulling him against her as she arched to push her breast into his mouth.  Her body shuddered underneath him sh he pressed his bulge against her thigh. 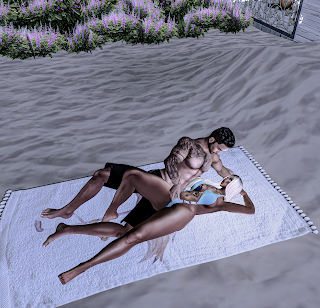 "You have me."  he leaned up, keeping one wrist pinned behind her head as his hand trailed down between her legs.  She parted for him, eager and accepting of his attention.  He watched her eyes as his fingertips slipped across the outline of her lips.  She moaned softly, lust filled eyes staring up at him.  Each moan grew stronger as he teased her, working his fingers along her soft mound, grinding that sensitive button through her now soaking bottoms.

"Then take me... Please... "  She pleaded as her hand gripped the front of his shorts, trying to push them down.