TAKE AT THE LAKE 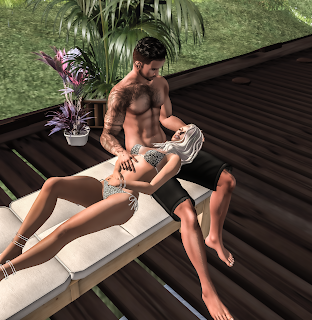 The sun baked down on them in the midday heat.  She looked as beautiful as he remembered, maybe more so.   His fingers brushed through her hair as she stared up at him, though he wasn't sure if she was really looking at him or if she was lost in her own world of thought.

"What are you looking at?"  He smiled as he gave her hair a tug.

"Owwwww.." she raked her fingers along his chest in protest.  "Don't, you know what that does to me."  She smiled and kissed his stomach.  "I was just thinking how we've changed so much in the time we were apart and yet, you still feel the same."

His fingers tickled across her stomach as he stroked her hair again.  "Cause I am the same."  Those same fingers looped under her and pulled her up into his lap.  His smile warm as the sun.  "Same ol' pervert you always knew." 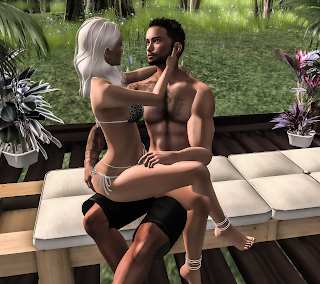 Giggling, she ran her finger through his hair and leaned in close, licking his nose.  "Jeez, you aren't just a perv.  You are a good guy."

"No.. I am a perv."  His smile was wide as he leaned in and bit her neck, his tongue tracing her pulse as it quickened.  The bulge growing under the weight of her as she wiggled on his lap trying to free herself from his grasp.

"Oh god... don't do that... we are visible to everyone.."  her cheeks flushed as she spoke feeling his hand cupping her breast over her bikini.  The protests didn't slow him at all, his strong hands squeezed at her fleshy orb, rolling her covered nipple with his thumb until it was as hard as a diamond.  Her whimpers only seemed to urge him on.

"Oh.. I bet they all want to see don't they?"  He jerked her up and moved them to the edge of the dock, in clear view of everyone on the lake. 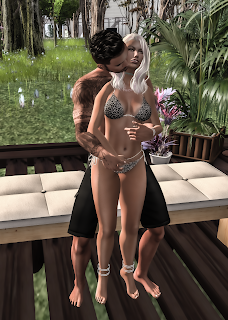 She shuddered in response, "What are you doing to me... fuck..."  Her head flung back against his shoulder, knees so weak he had to put an arm around her to hold her up.  His fingers locked with hers as he guided her hand down to her soaked bikini bottoms.  The growl muffled against his neck.

"We haven't even been in the water yet and you are so very wet."  His teeth raked her neck like an animal to it's mate.

"You fucking tease.."  her body shook against his, her fingers and his working along her covered mound, hitting at her sensitive clit that was so poorly protected by her thin suit.

"Oh, you don't want to be teased?"  pushing her down onto the bench, thankful for the padding as he laid his weigh on top of her.  His fingers now grinding against her wet mound all on their own as her arms wrapped around his neck, pulling him closer. 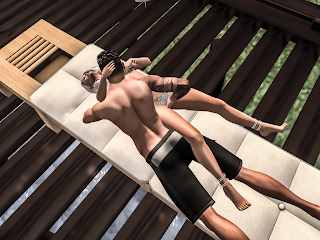 "No what?"  his fingers slid up, making slow grinds just against her swollen button.

"No Sir... don't tease me." She flushed at her own words, biting her lip and looking him in the eyes.

"I never tease you."  His fingers pushed her bottoms to the side, exposing her glistening lips to the breeze.  She moaned in anticipation, legs parting naturally for him as his dominance became clear.

Parting her, teasing his fingers between her velvety petals as his lips met hers in a passionate kiss.  Tongue twisted together in a delicate dance even while his fingers explored into her tight entrance.  She shook against him, spreading wider, no longer caring who could see her.  They stayed like this, kissing and exploring until she thought he felt her tremble as if her body would explode. 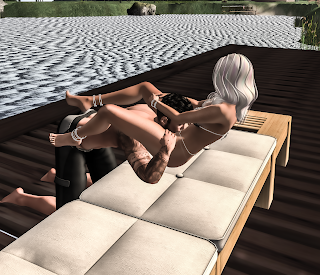 His fingers slipped from her soft sex and she let out an exasperated sigh.  Though a moment later that sigh turned into a shriek of excitement and surprise as he dragged her quickly to the edge of the bench and pushed his face between her thighs.

Everyone at the lake got something to remember that day, but then again, isn't that what a good summer is all about?

The running water in the bathroom stopped at last.  Mitch sat patiently, waiting on the beauty to emerge.  He knew she was doing her best to prepare for him.  It had been a long time since they had spent time together, but he didn't tell her how much he had craved her in the meantime.  He listened to the ambient sounds of her preperation.  She hummed a soft song that he didn't recognize as she hung up her dress in the closet.  Mitch bit his lip in anticipation of what she must have been wearing underneth. 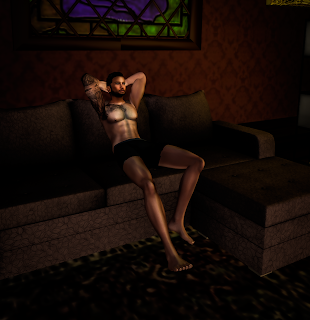 The site did not disappoint.  He stifled his growl of approval when she finally came into view.  Her body was still taught an toned.  She took great care of herself, it was easy to see.  His eyes took in her beauty as she crossed the distance with feline grace.  Funny how even a mouse can look like the cat when they move.  She laid her body against his on the sofa, and smiles.  Mitch pulled her up, looking deep into her eyes and just let her body meld to his.  They exchanged no words, there had been nothing but talking for far too long. 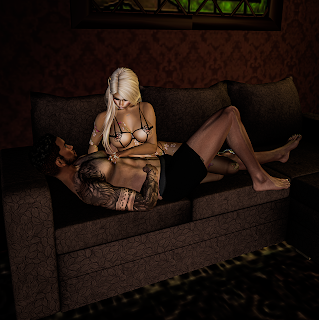 The smooth feel of her flesh under his hands brought his hunger to a raging inferno inside his chest.  His lips pressed to hers, sucking at those delicate petals as they opened to invite his tongue.  Her taste was familiar and pleasing.  Their bodies moved against each other as he explored her.  She kept her arms around his neck for strength as his hands caressed her every curve.

The room faded away and their desire consumed the night. 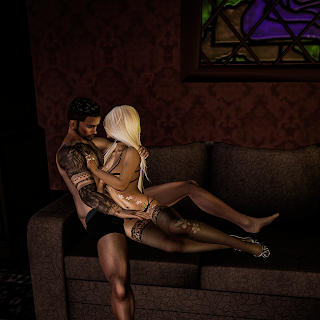 The deep growl ripped from Mitch's chest as he gripped her ass and pulled her up, kissing and biting his way down her chest.  Her top gave him all the access he needed to her body.  In the dark he could hear the tremble in her voice and the moan in every breath.  His teeth bit the soft skin of her breast, leaving his mark before he reached her nipple.  Sucking it in, dragging his rough tongue across the hard tip as she moved her body on top.  Spreading herself over him so her soft, needy sex could grind against him. 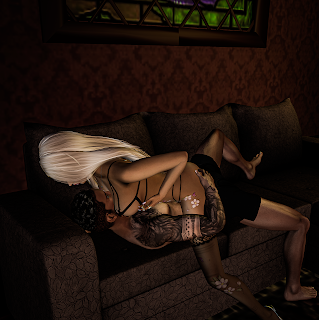 His cock ached in his boxers but he refused to give into that desire.  Mitch instead kept his focus on her.  He alternated from one nipple to the other, taking them in his mouth and attacking them with his tongue.  Her soft mound ground down harder on his abdomen and he could feel the heat and moisture spreading across his skin.  He craved that moisture.  Wanted her taste on his tongue and her nectar on his lips. 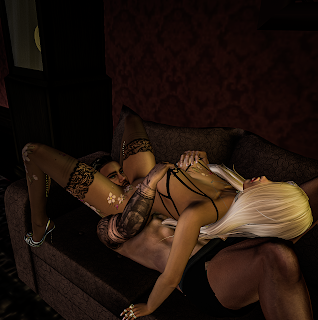 She gasped out loud as he pulled her up and dove his tongue into her soft folds.  She shook and arched her back, pushing herself against his face.  He felt empowered, gripping her breasts and squeezing her trapped nipples between his fingers as he feasted on her velvet lips.  The darkness echoed her pleasure in the sounds of panted moans.

It had been too long, and he would claim all of her tonight.