DOWN TO MY TOES

Hey gang.  It's time for a review.  I know you love the hot stories, but if you want to make hot stories of your own you need the right equipment, and WS is always putting out the best stuff to fill out your collection.  This time is no different.  It's the ::WS:: Foot Fetish Shoe Rack 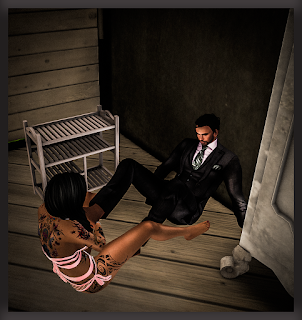 The shoe rack is well built and as always comes with a color changing HUD so you can match it to your home or playroom.  It also comes with props that can be added to the rack to flesh out the fun make it all your own.  The menu can give you options of shoes, sex toys, nylons, etc. 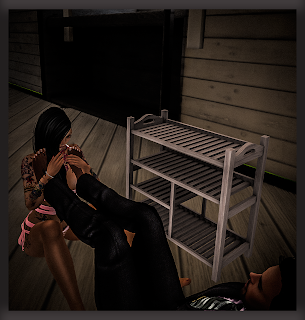 The menu has a nice selection of choices for both dominant and submissive, including solo animations for those who like alone time with all those sexy shoes.  The punishment menu is fun for when you catch your sub trying on shoes they aren't supposed to have, or stick to the foot worship menu that really gives the meaning to the Foot Fetish side of the rack.  As with everything, the animations are well done and the menu is clear and simple to use.  The other great thing is the aftercare menu, which so many forget in sex furniture.  Great to use after delving through the sex menu options. 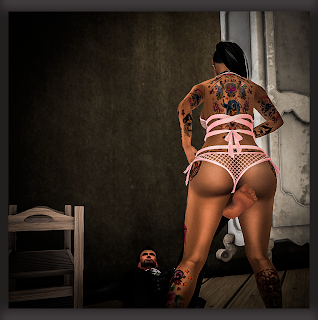 There are both Femdomme and Maledom selections in the menu so no one is excluded.

I enjoyed my time playing with the ::WS:: Foot Fetish Shoe Rack.  It is versatile and customizable enough to meet anyone's expectations.  There is no doubt in my mind that if you are into feet, this is the rack for you.  And if you aren't, it can still  be a fun thing to have in your closet.  I know it will get used well in mine. 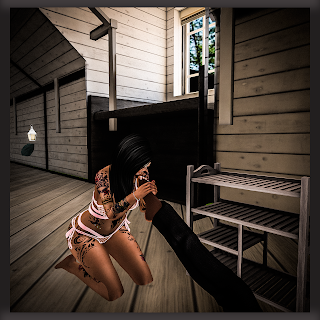 I am going to give the ::WS:: Foot Fetish Shoe Rack a solid 4 out of 5 cocks up.
Until next time, keep those freak flags flying. 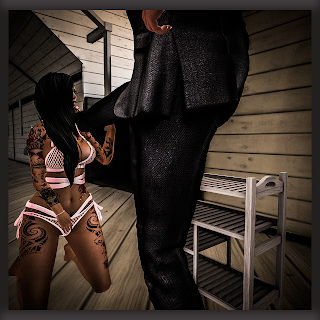 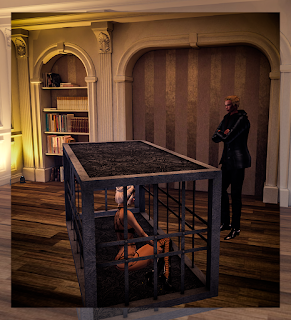 Trevor entered the room with soft steps.  Even in the dim light he could see her there, waiting in the cage where he had left her.  She was pensive, tired, and wanting.  That was what he wanted, to see the hunger grow in her eyes from anticipation long past the point of breaking.  He could smell the musk of her arousal in the air.

He circled the cage, watching her with keen interest.  She watched him too, the rise and fall of her chest quickening the nearer he approached the metal bars. 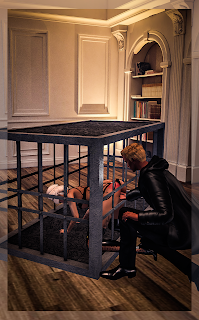 "Turn around, ass to the bars."  He kept his voice firm and commanding.  No need to shout or push, she was ready to do as she was told now.  The desire having replaced any need to be bratty or resistant.  She turned her self quickly, feet pushing between the bars as she backed herself against the cool metal rods.

His fingers raked along her skin, teasing her back and thighs.  Kneeling behind her, this enjoyment swelled in his pants when he squeezed her round cheeks.  The wetness of her panties so very apparent to the eyes, and the brush of his fingers across their silk fabric.  Her breath caught in her chest, body shuddering when his digit teased along her barely covered lips.  She dropped her head down, moaning and pushing harder against the cage while he teased her in light caresses that only served to push her more. 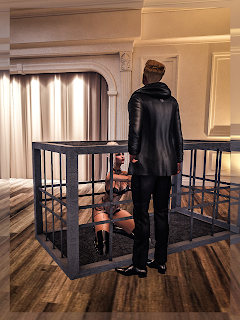 "Is my girl ready to pay for her behavior?"  He pushed harder against her soft mound, feeling her grind against his palm.

"Yes Sir.  Anything Sir wishes."  Her words were  muffled, mouth pressed into the bend of her arm as he continued to tease her relentlessly.

"I will remember that."  His smile widened as he stood, pressing himself against the cage and looking down at her.  She moved quickly, hand reaching for his pants.  His aching member throbbed as she touched it through the fabric.  Playing with it's length while looking up into his eyes.

"May I have it Sir?"  Her eyes begged more than her words.  Fingers trying to wrap around it's girth but unable while covered.

"Thank you Sir!" The eagerness in her voice was duplicated by the speed her fingers moved to his zipper.  Pulling it down with a tug, her fingers parted the metal teeth and felt for the opening in his boxers.  He never looked from her eyes, seeing the lust there when she finally took him in her grip let him know she was the right one for him.

His eyelids closed a bit as waves of pleasure traveled up his spine.  Her fingers worked their magic along his length, her own smile there at the way he affected him.  It took effort for him to stand still, not giving in to how much he wanted to move his hips in reaction to her touch.   He bit his lip, stifling a moan that she wanted.  His every thought on what would push her need.

"Is Sir not happy?"  Her eyes looked to his rigid shaft, speeding up just a bit as her lips trembled behind that smile.

"I am sure girl is doing her best."  His cheeks clenched, feeling his member swell in response. 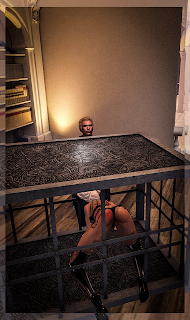 Nodding, she leaned in, lips pressed against his head while her tongue dipped out along the fleshy underside.  His body betrayed him, rocking forward with a low growl of need.  He could feel her moan echo around him.  His fingers moving through the bars, taking her hair and guiding her closer.  Their motions synced around the motion of his hips.  It sent shivers down him when he felt her arms moving out of the cage, gripping his cheeks through his pants, nails trying to dig in and pull in through the metal bars.

He pulled away, reluctantly, but firmly.  Watching her eyes rise to his again as her hand wiped away the saliva that had run down her chin.  She turned around without a word between them, backing herself to the cage once more.  The offering was simple and direct as her fingers pulled aside the thin silk covering her sex. 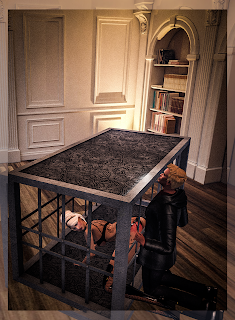 "Yes," he thought as he kneeled behind his girl, "she is definitely the right one for this."

I wasn't in the waiting area long before the receptionist called my name " Mr Montgomery will see you now ", I followed her to an office door which she held open for me.


He was sitting  behind  the desk  leaning back in his leather chair. He pointed  " Take a seat Miss Pearl" 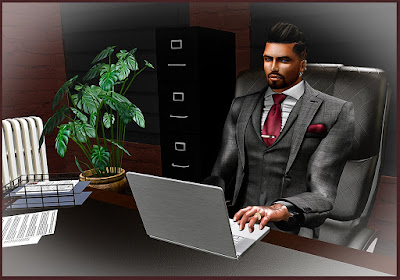 His eyes flickered back to his laptop and he continued typing, seemingly ignoring me. I watched him type, each stroke of the keyboard firm and measured. His suit fitted him well and his broad chest strained at his shirt. I found myself wondering if his caresses were as firm as his keystrokes. I flushed as he  suddenly looked up sharply and then went back to typing.

I sat quietly, trying not to disturb him. I was here for interview not to daydream.Uneasily I fidgeted in my chair.
Eventually he looked up." Bored?" he asked sharply. 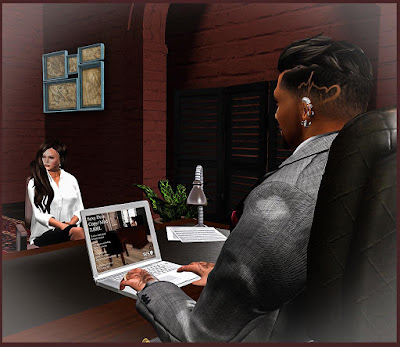 " No.. no not at all" I managed to stammer, blushing.
" Hmmm" He closed his laptop and leaned towards me across the desk."  Well let's see what you've got".

" Work, Miss Pearl. Your resume. I have  the copy you sent."

He looked over the document and asked a few questions about places I'd worked and past employees.

" Shorthand?" I shook my head slightly " Well a little", I admitted ,"self taught though"

He had a presence about him that had  me sitting on the edge of my seat, and I  felt very unsettled under  his gaze"

" Some would be useful," he affirmed ," but I'm looking  more for a personal assistant than a secretary. "
He rose and walked around the desk. " Dictation" he announced suddenly, pushing a pen and notepad in front of me." Take this down." 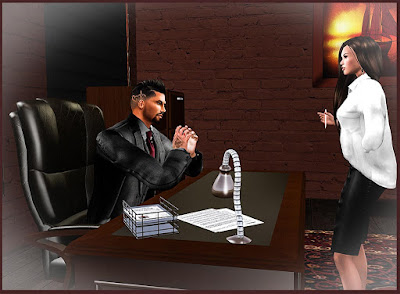 He moved to stand behind me. I was more used to a tablet, but I like to rise to a challenge so I did my best. Nervously I wrote as fast as I could and my hand trembled a little wondering what he was doing.

" No need to be nervous, Miss Pearl" he said resting his hand on my shoulder. His flesh was warm through the thin silk of my blouse and I shivered as he leaned over me.The hairs on the back of my neck bristled as his hot breath danced over them and I took a deep breath to calm myself.

" Not bad" he said stepping back. " Do you always wear provocative clothing in the office?"

I looked down at my blouse and sensible skirt not understanding. Placing his hand firmly under my chin he brought me to my feet .Without taking his eyes from me he calmly tore open the front of my blouse, continuing until the blouse lay in shreds and discarded at my feet and my lacy bra lay exposed to his gaze.
He smiled at my discomfort. " Personal assistant " he reminded me. 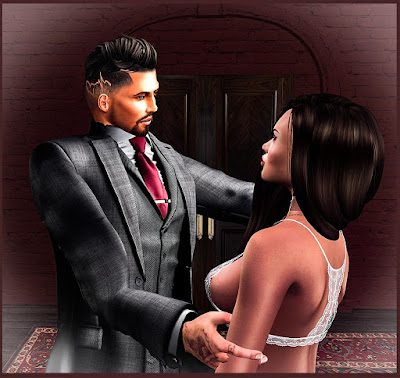 He reached with the other hand and cupped my breast, stroking the flesh through the lace. Grasping my chin more firmly he pinched a nipple hard, smiling as I tried to protest through lips held closed by  his fingers.

" Checking the merchandise " he said, deftly undoing my waistband and slipping my skirt down my thighs to join the scraps of my blouse on the carpet. 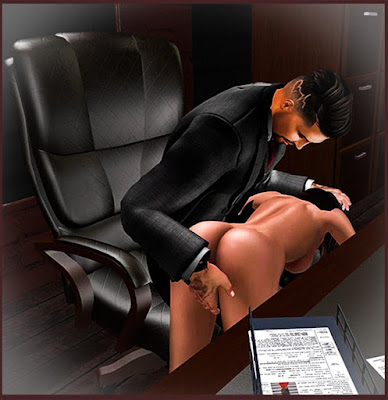 I was  trembling now, though not with nervousness. I closed my eyes waiting for the touch I knew was coming.

" Stand up" he said suddenly, moving a step back.

Disappointed, I stood and he turned me towards him. Running a finger down my thigh and  along my juicy lips, he took me by the chin again, and held it to my mouth. Before I could even think about opening my mouth or not he forced the finger inside and I could taste my juices mixed with his salty skin. I moaned slightly and he smirked.

" Almost ready " he said, apparently to himself.

My eyes closed, I sucked on his large finger, praying for more ,but instead  he ordered me to get up on the desk edge. I felt him moving  in front of me and he lifted my head to show me a thick wooden pencil in his hand. " Pencil holder" he said grinning,pushing the tip of the pencil between my teeth. " Here?" He removed it again, walking to the other side of the desk " or here?"

I gasped as I felt the touch of the pencil tracing  my  folds, exploring them, slipping in a little as the juice flowed from me. I flushed with embarrassment and shivered with delight. 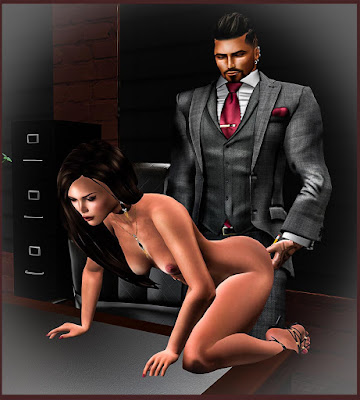 He grunted, thrusting the hard cold wood  inside me - only somehow it wasnt hard, or cold or..  Just as I realised it was his finger deep inside me he  stopped and  flipped me over, walking to the other side of the desk. I lay there, exposed to his gaze, my body trembling. I saw his hand reach for his buckle as he groaned " Little Miss Perfect". He  spread my legs wide , deeply inhaling my scent and moving swiftly on top of me, his hard member rigid, and his face flushed with desire. 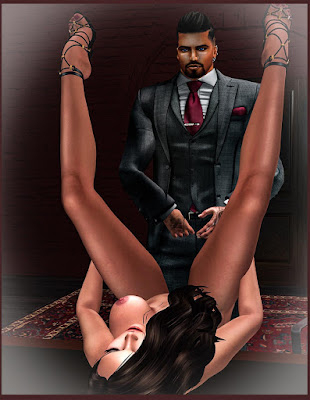 I didn't get the job.I'm not sure I even wanted it. But I got to know the desk intimately over the next few months, not to mention some of the other office equipment, and " Dictation" became a  guilty pleasure.
I have to admit it was the best interview I have ever had.

Posted by Ruby Pearl at 5:59 AM No comments: