NIGHT OF THE PREY

He waited for her, patient as the predator.  The tea she made was just as he liked it, the room smelled of his favorite scent, and the lights were dimmed in anticipation of his arrival.  All things he had come to expect in his visits with her.   The city loomed behind him, too far below to be heard.  Cars moved like ants and lights in buildings flicked like fireflies.  It was his concrete jungle.  Perfect for him in every way.

She entered the room slowly, wearily.  His eyes took in her feline grace.  Her motions were purposeful and teasing as her fingertips trailed along the flesh of her thighs and up across the laces of her corset.  Never once did she repeat the clothes she wore for him.  Always changing to keep his attention, no, to keep his desire.  Stopping to turn in front of him, giving a full view of her body in the outfit she chose.  He smiled and gripped her wrist, pulling her onto his lap.  His growing need all the sign she needed of his approval.

His lips brushed her neck, sucking softly at her pulse while his hand caressed her thigh up to her hip.  The quickening beat of her heart pleased him.  The contract of his skin against hers always added to his desire to undress her quickly, but tonight he wanted to take her slowly.  His fingers teased down her leg, then up again.  Making light trails that raised goosebumps over her flesh and brought trembles to her breath as it brushed across his ear.

"You look lovely tonight girl."  he said as he pulled her closer, feeling her weight shift onto his lap while his arms wrapped around her.

"Thank you, Sir."  Her eyes beamed with delight.  He wasn't sure if it was from the compliment, or the sudden embrace that had pleased her.

His lips brushed along her jaw and across to her lips.  Kissing her at last and feeling her relaxing against his chest.  The kiss was long, tender, and caring.  The predator in him growled but he pushed it back.  She was his, but he had learned her needs and signals.  The care she showed tonight was the care she needed from her Sir.  To be wanted and needed, but also safe and cared for.  Claiming her had been his choice, and with it came the responsibility to take care of those needs as well.

He let his hands guide her, moving her to straddle his leg more as they kissed.  Soon she relaxed more and he could feel the heat beginning to radiate off of her through his pants.  He pulled her back to look her in the eyes, the tenderness in her own transitioning to lust as her hips rolled and ground the silk covering over her mound against his leg.  He brushed his hand through her hair and cupped her face.  His eyes never left hers as she bit her lip to stifle the moans that tried to escape.  Her hands gripped his jacket for support while her body responded to his tender touch. 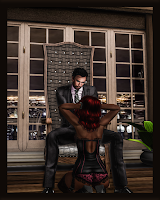 Stopping her against the protest in her eyes, he helped her to the floor and raised her arms above her head.  "There is time girl.  I am staying the night."  Her eyes lit up at the information.  The lust briefly replaced by a wide grin and one small tear from her eye.   His fingers swept away the tear and continued to caress down her neck and across her chest.  He watched her back arch and the breath catch in her throat when he ran his hand over the top of her breast.

"Sir, may I please you first?"  Her eyes shown a need in them to provide for him.  To give to him everything she could.  He rested back in the chair and simply nodded to her, watching the corner of her lips curl into a smile.

Her fingers ran up his pant covered leg, nails raking gently to awaken his nerves as she leaned forward and kissed him again.  His moan muffled in that kiss when her fingers brushed across his swollen bulge.  It jumped and strained against the fabric to be in her hand while she rubbed it beneath her palm.  He pulled her back, watching her eyes as her fingers moved to work at his belt.  They never looked away as she freed him from his pants.  His eyelids lowered only half way when his back arched at the pleasure of her touch.

"Thank you, Sir.  Let me show you how happy I am tonight."

He watched as her head lowered down to his throbbing shaft.  The beast within him growling to be freed, but for tonight the prey would have her way.

He caught her attention as soon as he entered the room.  The leather jacket, faded, ripped jeans, and his boots all looked out of place in the ballroom.  Jasmin crossed to him quickly, telling herself it was to usher him out before he could disrupt the party, but the tingling down her spine told her she wanted much more than that.  His boots clicked on the floor, pointed toe, snake skin, worn and comfortable.  She admired them longer than she meant to, thinking of the texture of the leather and wondered what his foot would look like.

She blushed when his eyes caught hers.  Listening to him explain that his car had broken down and he couldn't afford a taxi.  His smile was nice, personality was charming, and she found herself laughing at the silly jokes he stumbled over as he tried to impress her.  Many men did when she worked the ballroom.  They lost track of time and soon Jasmin had to excuse herself to help the last of the guests find their coats and call a few taxis for those who shouldn't drive.  Try as she might, she couldn't help but steal glances at him there, her eyes always drifting back to his feet.

He seemed surprised when she offered him a ride, and even she was surprised when instead of taking him home she turned towards her apartment.  His hand found her leg, caressing her thigh which was now exposed from the slit in her dress.  A chill ran up her spine, which he noticed and she tried to explain away as the cool night air.  He leaned over and kissed her, her heart raced as their tongues played against each other.  Her breath caught in her chest as he explored her leg and brushed his fingertips across her silk covered lips.  She hadn't planned on this, and her long tight dress really looked much better without the panty lines.  Now she wished she had chosen to go without.


They fell through her door a tangled mess of legs and arms fighting to get each other's clothes off.  Her dress fell away and she bent to pull off his boots.  The smell of them filled her senses and she trembled and took his feet in her hands.  Massaging them, rubbing small circles along the sole while looking into his eyes. 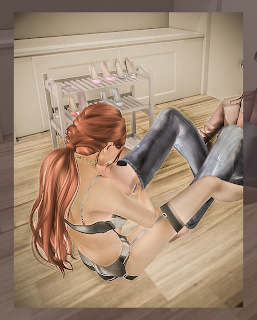 Pulling his feet up, resting one on each side of her face as she watched him recline back onto his elbows.  Jasmin smiled to him as she began to gently rub her face on the side of his large feet.  Kissing up the side and sucking in his big toe, watching his head roll back as she teased it in swirls of his tongue.  Her eyes stayed on his while she sucked each toe into her mouth, one by one.  His back arched as she gave him attention and she couldn't deny the heat rising from her core as she worshiped his feet.

"Jesus, Jasmin.." Those were the only words he spoke as she lifted his feet and surrounded her head.  Smiling at him as she took in the feel of him against her cheeks, the smell of his flesh, the taste of him again as she teased her tongue from his sole to his ankle. 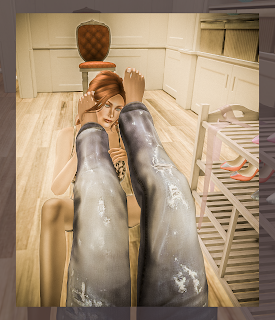 "Hush, Love.  This is all about me."  Her fingers slide down her body, cupping her breast and pinching her nipple as she rubbed her face against his sole.  Her eyes never leaving his, only darkening in lust while she bit her lip to stiffle the soft moans.   That became impossible when her fingers reached the damp fabric of her panties.  she closed her eyes, sucking in  toe again and groaning when she pressed against her clit. 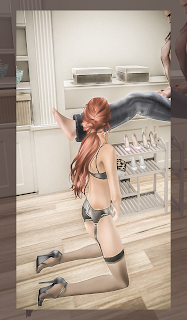 Biting his toe and looking at him again with a wicked grin, the stood and pulled his foot between her thighs.  "Baby I need you."  He nodded in understanding as his foot began to tease along her panties, pressing harder against the thin material when she ground down onto him.  Her head falling back, hips rocking and back arched in the pleasure of the moment.

Jasmin couldn't deny the longing building up at her core.  Her knees were getting weak and her body trembling as he worked back and forth against her silky wet mound.  His toes pushed the material between her lips, letting her slide back along the ridge of his foot with more direct pressure against her swollen clit. 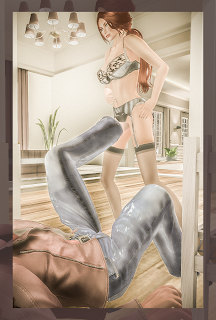 He stood, causing a whimpered pout of regret to escape her lips.  She was so close and her body ached to be pleased.  He moved quickly, pushing her down in front of he and shoving his foot back between her thighs.  It was so sudden the groaned out gasp even surprised her as she wrapped her arms around his thigh and began humping herself along his foot and ankle. 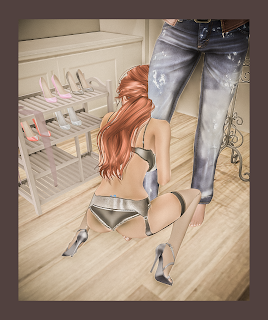 In her heat she barely registered the sound of the zipper being pulled down, but she knew he had her and she would do anything for the man in those snake skin boots.