The chains rattled as he turned the wheel, clinking and twisting until pulled taught by the weight of the young woman now raised onto her toes by the crane. She shifted, biting her lip to stifle the moan that still reached his ears. His fingers caressed her arms, moving to check the cuffs and make sure she was secure and safe before tracing them lightly down again. 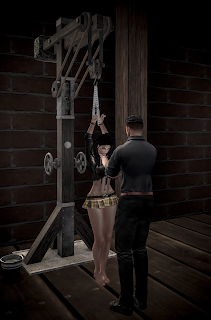 She had not spoken a word when she arrived. He answered the door and she simply walked inside and climbed the stairs, looking back to him to ensure he followed. Her hands moved over the wood of the crane as if inspecting it for it's craftsmanship. Those soft fingertips moving over the wheels and chain so delicately but he could see her tremble. Picking up the cuffs, she moved to him, barely looking him in the eye as she held the leather straps out for assistance.

Now here she was, dangling before him. His blood pumping to his groin as he toyed with her body. He twisted his fingers into her hair, turning her to kiss him. His tongue moving to hers, hearing that low moan again as her passion betrayed her and she kissed him in return. Their kiss deepened as his fingers moved across her stomach. Feeling her tense and move from his touch as he brushed across her sensitive points. Pulling her hair again to arch her back and hold her still. This was his time to explore her. 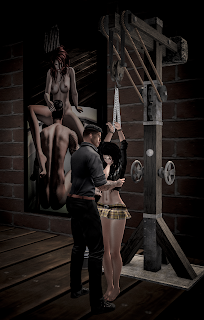 Breath caught in her chest when he cupped her breast through her top. Fingers teasing across those hardening tips as he leaned in and sucked at her neck. His tongue played across her skin, feeling her pulse quicken from his ministrations. The shirt gave her breasts little protection from his fingers. Gripping them firmly between his thumb and forefinger, pinching and rolling that hard little nub. Once again her body betrayed her as she shuddered and pulled hard at the rattling chains. 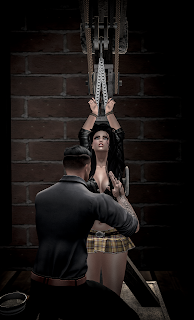 Lost in the moment, he lowered his body against hers. The warmth of his breath across her chest making her push on her toes to offer her breasts to his waiting mouth. Sucking her nipple into his eager lips, his saliva getting her shirt wet as he bit down on her hard tip with a primal growl in his throat. The need becoming urgent as he fought to keep his mind on his task. The chains clinked overhead as she pulled at them to brace herself. Her legs giving way as he tortured her nipple with his teeth and tongue. 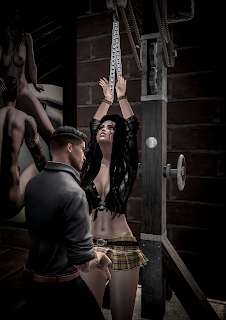 She bit down hard on her lip again, he was impressed how well she had kept herself quiet so far. His hand moved to cup her ass. Digging his fingers into that smooth flesh and realizing for the first time that she had come to him without bothering to put on panties. His cock throbbed at the boldness at which she had come here to give herself to him. His fingers found her slick lips, teasing them apart to explore their nectar coated folds. Looking into her lust filled eyes when he thrust two digits into her inner walls. It was the first time she openly moaned out her pleasure and that made him smile.

Reaching up and gripping her top, pulling until the seems tore away from her smooth flesh. Tossing the tattered remains on the floor before grabbing her from behind and pushing his fingers back between her legs. Those round, soft cheeks grinding back against his raging bulge. He could no longer hide his desire from her. Nor did he need to. 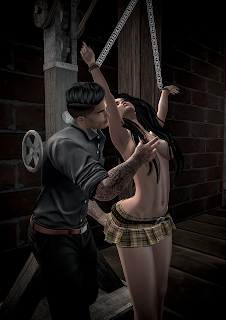 With one last look at him she whispered her first plea of the night. “Please Sir, I am yours. Make me your slut.” Never were there more perfect words spoken, but she was mistaken. He could not make her his slut, she already was.

Vy shifted in her chair, the tension had grown almost unbearable and she longed for it to be over.  Her eyes moved over the girl's body, taking in the curve of her breast and the perfection of her skin.  She barely noticed  the finger tracing her lip as she imagined kissing her way down the girl's stomach. 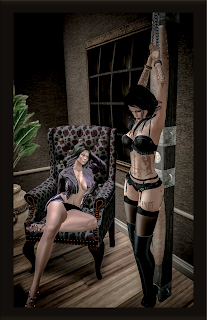 The raven haired beauty shifted as if burned by the lustful gaze of the Lady's eyes.  The chains rattled as she moved, keeping her eyes closed while she chewed at her lip.  Vy knew this signal well.  The girl was ready for her, the evidence of her need beginning to show in wetting outline of her lips.  She had been hanging there for almost an hour, one of the longest times she has taken to break for her Lady.

"Lady.. please..."  It was a whisper, but it was there.  In the tremble of the girl's lips, the words had slipped out and Vy stood to cross the short distance in response.  Her nails raked across the girl's stomach and up her side.  Vy could hear the sudden intake of air into the girl's lungs as her body tensed and shuddered.   Releasing the cuffs from the chains, Vy brushed the back of her hand down the girls chest, just making a short contact along the side of her breast.  Vy was sure the girl had almost collapsed.

"Come girl."  Vy said in a quiet but confident manner as she returned to her seat.  The girl moved to stand before her, watching her Lady and waiting for her next instruction.  To have moved to the seat before being offered a place would have been an immediate punishment.  Though Vy wasn't so sure the girl would object to any contact, even in the form of a whipping. 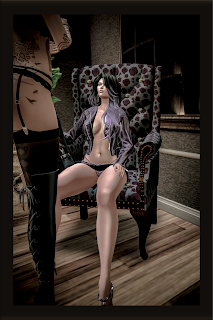 Vy patted her thigh once and the girl moved closer, lifting her leg and placing the heel of her boot on her Lady's thigh.  The boots had been a gift from Vy herself and the girl wore them often enough to show her appreciation without allowing the look to become tired or boring.  It showed Vy the effort the girl put in to making her Lady happy.  Vy's nails raked across the leather and up to the girls milky thigh.  Sliding along that smooth skin, watching it ripple as the girl fought to hold still under Vy's touch.  Vy found a bit of that honey that had run down the girl's leg and smiled, teasing her fingertips through it then bringing them to her lips for a small taste of her girl.

Vy patted her lap again and the girl sat.  Wrapping her arms around her Lady as she leaned in and kissed her lips with a soft, happy sigh.  It was the first reward the girl would get this evening, but it was as much a pleasure for Vy as it was the girl's.  Vy relished her scent, the musk of arousal mixing with the floral fragrance of her girl's shampoo.  Their lips moved in harmony, tongues slipping together, breath blending in a warm exchange of lust. 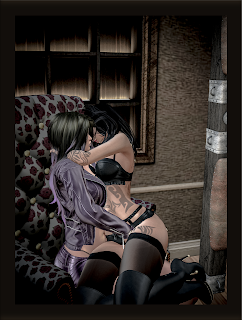 Vy explored her girl's body.  The soft flesh beneath her hands covered in excited goose bumps while their heat grew into an inferno.  Her girl mewed and moaned, muffled by Vy's lips as they kissed.  Vy teased her skin, cupped her breast, and grazed her fingertips across a covered nipple, letting the girl squirm and groan on Vy's lap.  The wet fabric covering the girl's mound was more evidence of Vy's affect on her as Vy moved to kiss and suck at the girl's pulse while tracing those folds through the thin fabric of her panties.

It made Vy's back arch when the girl began to explore her body in return.  Those soft hands moving over her skin, cupping her breast under her jacket, teasing her nipples in light strokes across the tip.  Vy's body trembled under her girl's weight and their kiss became fevered.  Pushing the girl away, Vy looked into her eyes, seeing her own need reflected in those deep dark pools.  The girl leaned down, kissing a soft path across Vy's skin. 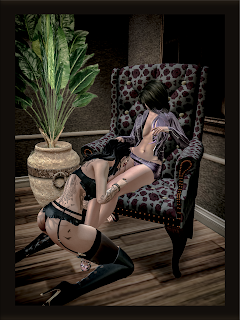 Her hair was soft under Vy's fingers as she twined it around each thin digit.  Guiding her lover down lower to her thighs.  The girl raked her skin with those perfectly manicured nails.  Not enough to leave marks, instead soft and subtle, making goosebumps across Vy's skin.  Each kiss of the girl's lips set her flesh on fire.  She burned for her, ached, as she always had.  Vy's nectar saturated her panties as the girl's fingers brushed up her thighs and teased her soft mound under the skirt.

"May I please you My Lady?"  the girl purred up at Vy, her eyes pleading as much as her voice.

"Yes, you have earned it well girl."  Vy's legs parted, giving her girl access to her covered treasure.

The girl wasted no time, kissing her way up Vy's thigh before brushing those lips softly across the wet covered mound of her Lady.  Vy lifted her leg, laying it over her girl's shoulder, pulling her closer no longer wanting to be teased.  This girl was hers and she was going to use her well. 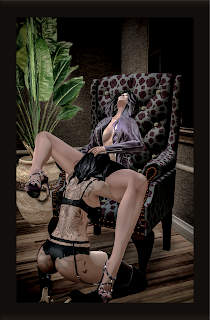